Below is an email I received from the Network of Spiritual Progressives and Tikkun.
Editor's note: It was a great honor to be able to publish some of Howard Zinn's reflections in Tikkun and for me to have his enthusiastic endorsement of my book The Left Hand of God. You can see why I felt such a great loss when he died almost 9 years ago. May his memory be a blessing for all of us--and read what he says below about Memorial Day. —Rabbi Michael Lerner, rabbilerner.tikkun@gmail.com
Memorial Day will be celebrated … by the usual betrayal of the dead, by the hypocritical patriotism of the politicians and contractors preparing for more wars, more graves to receive more flowers on future Memorial Days. The memory of the dead deserves a different dedication. To peace, to defiance of governments.
In 1974, I was invited by Tom Winship, the editor of the Boston Globe, who had been bold enough in 1971 to print part of the top secret Pentagon Papers on the history of the Vietnam War, to write a bi-weekly column for the op-ed page of the newspaper. I did that for about a year and a half. The column below appeared June 2, 1976, in connection with that year’s Memorial Day. After it appeared, my column was canceled.
Memorial Day will be celebrated as usual, by high-speed collisions of automobiles and bodies strewn on highways and the sound of ambulance sirens throughout the land.
It will also be celebrated by the display of flags, the sound of bugles and drums, by parades and speeches and unthinking applause.
It will be celebrated by giant corporations, which make guns, bombs, fighter planes, aircraft carriers and an endless assortment of military junk and which await the $100 billion in contracts to be approved soon by Congress and the President.
There was a young woman in New Hampshire who refused to allow her husband, killed in Vietnam, to be given a military burial. She rejected the hollow ceremony ordered by those who sent him and 50,000 others to their deaths. Her courage should be cherished on Memorial Day. There were the B52 pilots who refused to fly those last vicious raids of Nixon’s and Kissinger’s war. Have any of the great universities, so quick to give honorary degrees to God-knows-whom, thought to honor those men at this Commencement time, on this Memorial Day?
No politician who voted funds for war, no business contractor for the military, no general who ordered young men into battle, no FBI man who spied on anti-war activities, should be invited to public ceremonies on this sacred day. Let the dead of past wars be honored. Let those who live pledge themselves never to embark on mass slaughter again.
"The shell had his number on it. The blood ran into the ground…Where his chest ought to have been they pinned the Congressional Medal, the DSC, the Medaille Militaire, the Belgian Croix de Guerre, the Italian gold medal, The Vitutea Militara sent by Queen Marie of Rumania. All the Washingtonians brought flowers .. Woodrow Wilson brought a bouquet of poppies."
Those are the concluding lines of John Dos Passos angry novel 1919. Let us honor him on Memorial Day.
And also Thoreau, who went to jail to protest the Mexican War.
And Mark Twain, who denounced our war against the Filipinos at the turn of the century.
And I.F. Stone, who virtually alone among newspaper editors exposed the fraud and brutality of the Korean War.
Let us honor Martin Luther King, who refused the enticements of the White House, and the cautions of associates, and thundered against the war in Vietnam.
Memorial Day should be a day for putting flowers on graves and planting trees. Also, for destroying the weapons of death that endanger us more than they protect us, that waste our resources and threaten our children and grandchildren.
On Memorial Day we should take note that, in the name of "defense," our taxes have been used to spend a quarter of a billion dollars on a helicopter assault ship called "the biggest floating lemon," which was accepted by the Navy although it had over 2,000 major defects at the time of its trial cruise.
Meanwhile, there is such a shortage of housing that millions live in dilapidated sections of our cities and millions more are forced to pay high rents or high interest rates on their mortgages. There’s 90 billion for the B1 bomber, but people don’t have money to pay hospital bills.
We must be practical, say those whose practicality has consisted of a war every generation. We mustn’t deplete our defenses. Say those who have depleted our youth, stolen our resources. In the end, it is living people, not corpses, creative energy, not destructive rage, which are our only real defense, not just against other governments trying to kill us, but against our own, also trying to kill us.
Let us not set out, this Memorial Day, on the same old drunken ride to death.
Published by the Boston Globe • June 2, 1976 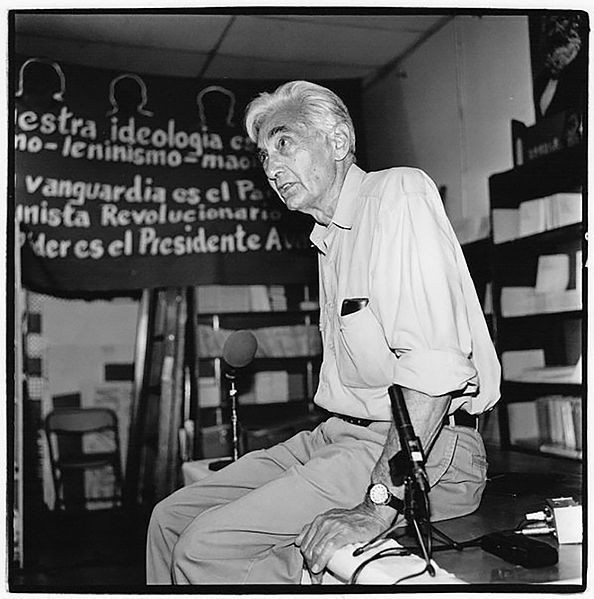